The US current inclination towards war may be analysed with reference to the long-run Kondratieff wave cycle, also known as the K-wave. This cycle, which lasts about 50 to 60 years, passes through four distinct economic phases: inflationary growth, recession, deflationary growth and depression. These phases are also known as the spring, summer, autumn and winter cycle, respectively. 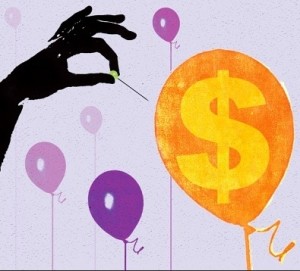 Starting from a depressed economy with low employment, excess business capacity, low money base and low prices the inflationary growth period sees the accumulation of wealth and productive capital with a growing money base. This period is characterised by rising employment, productivity and wages within a stable inflationary environment.

Nonetheless, once the economy reaches its maximum potentials placed on it by its limited labour, capital and natural resources, inefficiencies creep in. The limits to potential growth force prices thereafter to rise, sparking a competition for scarce resources. In a fiat money environment, this inflationary trend would be more evident since the money base keeps rising even after the economy would have reached its maximum potential. The correction to this imbalance brings about a period of primary recession or the summer cycle. In many occasions, wars have been the causes of reaction.

Thereafter, the economy falls into a plateau period of deflationary growth or the autumn cycle. This is a period often characterised by stock market and property bubbles but with a relatively flat growth in the real economy. A strong feeling of affluence and economic prosperity prevails. Nonetheless, this period also sees a huge build-up of debt brought about by the high levels of consumption and prices observed in this period.

It\’s the repudiation of debt that would then propel the economy into a state of depression or the winter cycle. Economic bubbles created by excessive credits burst in this period would shrink money base and the price structure. Stock markets and property prices would fall sharply in this phase. A reverse of the inflationary growth period takes place with a marked fall in the real productive sector, coupled with a rise in unemployment.

The K-wave is indeed caused by long cycles of debt build-ups and collapses. The monetary system is no doubt behind this cycle and the present debt-based fiat money system will only amplify it. Accordingly, the K-wave has implications for global politics. Periods of recessions and depressions are often plagued with wars and conflicts. The US is currently at the peak of a cycle it is entering a state of depression (winter).

Nonetheless, at the current peak, the global economy finds itself flooded with dollar liquidity. In the absence of a numeraire like gold (for example, the gold standard of Bretton Woods), this dollar liquidity keeps ballooning by the minute. China’s foreign reserves alone have exceeded US$1 trillion (about RM3.5 trillion) which is about 20 times the US’ reserves. This excessive and ever-ballooning dollar liquidity was brought about mostly by the US’ prolonged current account deficits. The global economy is now in an unsustainable position. With countries holding huge dollar reserves but with limited dollar-denominated assets, the depreciation of the dollar is inevitable. This has created substantial global macroeconomic imbalance with economic bubbles worldwide, particularly stock market and real estate bubbles. This has brought the world to the verge of a financial cliff.

This time, the winter on the Kondratieff wave is a cause for worry. It is global in nature. The downward movement would not only bring down the prices of almost everything global stock markets, other financial assets, real estate and commodities but in the present fiat monetary system, the reverse process of money creation would also cause a shrinkage in global money base with adverse effects on global real economy. This could come in the form of low business prospects and production, high unemployment rate, high rate of business failures and bankruptcies in a low-interest rates environment coupled with systemic banking crises. To bail out their respective economies, many governments would go into heavy debt as was the case during the 1997 East Asian financial crisis.

It is in such situations that nations often resort to wars to solve the “imbalances” or to mark their hegemony. Hence, it comes as no surprise that the US is in a mood for war, using terrorism as its pretext to do so. The US has already deployed warships to the Gulf area amidst escalating propaganda campaign against Iran. With efforts aimed at pacifying North Korea, Iran seems to be the sole target for the next war.

At this juncture, it is hoped that major powers like Russia and China take collective action to stop this aggression for the betterment of humanity.

An important fact to note is that American war adventures are indeed financed through current account deficits, that is, by foreign nations, particularly Japan and China which run trade surpluses with the US by accumulating dollar reserves. With the dollar depreciating, this would indeed be “free” financing. Perhaps nations should stop this to curb US imperialist ambitions.

Paul Craig Roberts, former assistant secretary of the Treasury in the Reagan administration, said, “It is ironic that Japan, the only nation to experience nuclear attack by the US, is banker to the Bush regime as it prepares a possible nuclear attack on Iran.”

Since the debt-based monetary system is significantly behind the Kondratieff wave cycle and its accompanying wars, it is imperative that the global monetary system be revamped. Nations must understand what brought them to such a vulnerable position and seek solutions that are more just and stable in the long run.

Suggestions like creating a single global currency, a global central bank or some forms of modified special drawing rights can substantially reduce the volatility inherent in the global financial system. But they can still cause other socio-economic-politico problems due to their fiat nature.

A more viable solution capable of creating lasting stability and fairness is a global currency tied to a numeraire. Hence, some forms of a real money system based on commodities like gold are surely worth considering.

Interestingly, in the midst of all these, gold does stand high, and is likely to rise to new heights displaying its immunity and sovereignty over false and defective systems.