In the recent Kongress Profesor Negara held at PWTC, 6 July 2011 to 8 July 2011, Professor Datuk Dr. Shamsul Amri Baharuddin, a social anthropologist and the Founding Director of the Institute of Ethnic Studies (KITA), Universiti Kebangsaan Malaysia (UKM) made a presentation titled “Ilmu Mentransformasi Negara – Perspektif Sains Sosial” that touched on the value of peace.  His eloquence in presenting his arguments prompted me to write this article.  In his analysis of economics of peace in Malaysia he remarked that what exists in Malaysia is not social integration but rather social cohesion, i.e. Malaysians talk conflict but walk cohesion.  The learned professor suggested some kind of early warning system be placed to detect social discontentment and threats to social peace.

I cannot agree less with the professor that at current times we need to give some thought to economics of peace.  With peace, we can enjoy economic activities – both production and consumption. It is common for people to estimate costs of wars and conflicts but seldom do we measure the economic benefits of peace. 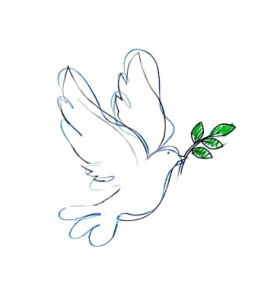 Peace is the priceless characteristic of any society.  If we think deeply, we cannot but come to the conclusion that peace is the ultimate of life.  It is a combination of positive feelings of happiness, calmness, contentedness, love, compassion and harmony with nature, with the absence of negative ones like pain, conflict, hostility and imbalance with nature.  We may attain this peace when the inner self and the outer environment are in balance and harmony.  One who experiences peace would depict a healthy physical and mental state, which needs nourishment from inside and outside, i.e. spiritual and material needs.

The word Salam or the phrase Salam 1Malaysia are greetings that depict peace onto others.  Indeed the word Islam too has its roots in a word that means peace.  “Assalamu’alaikum” which means ‘peace unto you’ is also said to be the greetings of the people of the Paradise.

Ironically with all the rapid economic and technological progress around us, there is less peace and tranquility around the world.  There seem to be more inner and outer imbalance that is causing more pain, hostility, lack of welfare, environmental destruction and so forth.

The Institute for Economics and Peace (IEP), based in Sydney, releases an annual Global Peace Index (GPI), which is apparently the world’s leading measure of global peacefulness.  The index gauges the peace levels in 153 countries by taking into account 23 indicators that include levels of domestic and international conflict, perceived criminality in society, level of violent crime, violent demonstrations, threat of terrorist attacks and militarization.

The cost of absence of peace can be huge.  For example, to prevent just housebreaking we install burglar alarms, keep dogs, pay for security guards, keep lights on when we go for vacations etc.  All these involve cost.  Victims of burglary and violent crimes not only incur economic costs but also psychological costs.  There is also huge public cost incurred for the prevention of crime and maintenance of peace.  This includes costs of maintaining police force, both development and operational costs, costs of judiciary to try criminals in the courts and also costs of prisons that includes operational costs and maintaining the convicted inmates.  Hence criminals incur cost to the society whether they successfully carry out their crime or caught and convicted.

The table below provides the Global Peace Index ranking for selected countries.  Iceland ranked number 1 as the most peaceful country among the 153 countries ranked.  Somalia ranked last.  Interestingly Malaysia ranked 19, i.e. ranking top among the Southeast Asian countries, beating even Singapore that ranked 24.  It is indeed true that Malaysia is a highly tolerant and peaceful country.  This is what among others, attracted immigrants into this country, being blessed with economic prosperity and peace.  For some reason Brunei has not been ranked.  If it were, I believe it would have occupied a respectable rank too. 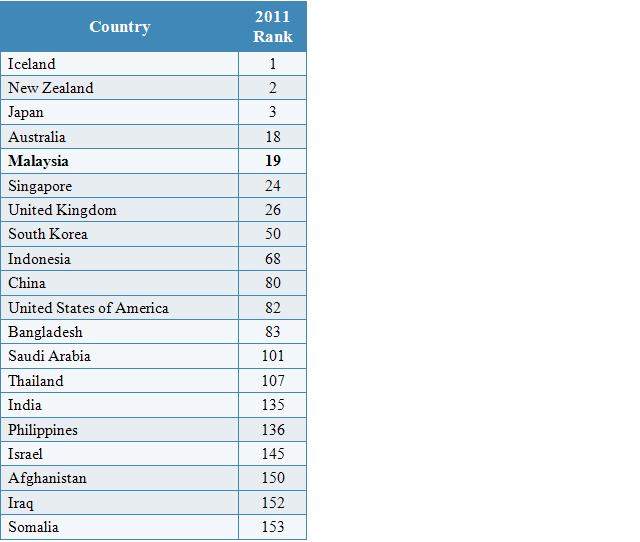 According to the GPI Report, countries of the Arab Spring (not shown in the table) saw drastic drop in their rankings.  Libya (143) for example saw the most significant drop, i.e. falling 83 places while Bahrain (123) and Egypt (73) dropped 51 and 24 places respectively.

What we can learn from the Arab Spring is that “forced peace” cannot last.  Peace must come from within self.  For this to happen, I believe that the basic necessities of life must be guaranteed for the people– food, clothing, shelter, health, education, transportation and religious freedom.  If people enjoy the minimum of these I believe they will not revolt.

The GPI Report contends that for the period 2006-2010, a complete cessation of violence would have resulted in a whopping economic gain of US$37.58 trillion, i.e.  US$12.62 trillion of economic activity redirected from industries that generate or contain violence to other productive industries, and another US$24.96 trillion from additional economic activity generated.  To quote the report:

If the world had been 25% more peaceful over the past year the global economy would have reaped an additional economic benefit of just over US$2 trillion. This amount would pay for the 2% of global GDP per annum investment estimated by the Stern Review to avoid the worst effects of climate change, cover the cost of achieving the Millennium Development Goals, eliminate the public debt of Greece, Portugal and Ireland, and address the one-off rebuilding costs of the most expensive natural disaster in history – the 2011 Japanese earthquake and tsunami.

The Institute for Economics and Peace also reports a general fall in peace globally.  Hence there seems to be a lack of or fall in peace in almost every nation of the world.  There may be many reasons for this observation, but I contend that significantly the cause is rooted in the present-day global monetary system, characterized by fiat money and compound interest.  These characteristics are continuously transferring wealth from the middle and low income groups to the high income group, causing a huge wealth and income gap among the people.  These capitalistic features have now brought the world towards the danger of prolonged economic recession and social unrest.  It is these characteristics that are causing even the advanced nations of the world – like Japan, Europe and the US – to dwindle economically. The younger generation is particularly discontented and is rising up against the ruling powers.

Malaysia too has been observing widening disparity in income and wealth distribution among its people, both inter and intra racial.  I would not blame this on the strength of any one race or the weakness of another, but again significantly blame it on the prevailing monetary system.  As a consequence of colonial monetary policies where money is mostly created by the commercial banks out of thin air, together with the limited liability law, have transferred tremendous wealth away from the people, causing large wealth-ownership gap among the races.  Accordingly, the system has now caused many Malays, the pioneer people of the country, to become economically distressed and hence the apparent dissatisfaction of many Malays towards the ruling government.  Others are exploiting the situation for the political opportunity that comes with it.

In my opinion, this also why BERSIH 2.0 organized by the opposition parties seem to have garnered some support.  The support is not so much for its ideological stand but rather an expression of economic distress caused by the present-day monetary system.  Household debt including credit card debt is rising exponentially.  With continued global recession and threat of hyperinflation, this distress can only worsen.  Of course people must be given avenues to voice their opinions and dissatisfaction, but using street rallies for this purpose does not bring good to the people.  Not only it costs a lot of money to mobilize the police force etc. to contain such rallies, the country would lose a lot from reduced economic activity.  Normally such rallies would also end up in violence, destruction of public property and filthy streets.

To attain general peace, therefore, I contend that the government strives to make every individual to be at peace with his or her self by guaranteeing the basic necessities as mentioned earlier.  This would, of course, necessitates a gradual revamp of the monetary system and redistribution of national wealth to reduce inter and intra racial economic gap.  As a national policy, we may pursue social cohesion rather than social integration where each race respects the language, culture and religion of others, i.e. pursue unity in diversity.  In this way we may enjoy ‘peace in colour’ instead of a homogenous dull.