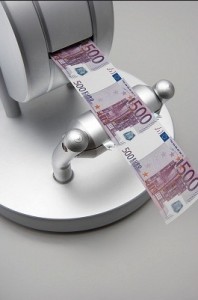 Let us illustrate how this is done. Say that Mr X found RM1000, which he decided to deposit into a bank account. For simplicity, let us assume there is only one bank in the economy (alternatively you may think of all banks being consolidated or merged into a single entity). A T-account balance sheet entry of the bank would appear as below:

The cash account (reserve) is debited while Mr X’s deposit account is credited with RM1,000. The cash reserve now is 100 per cent of the deposit. However, since the bank is required to keep only 10 per cent as reserves, the bank creates additional deposits until the reserve is 10 per cent of total deposits. How can additional deposits be created? By means of giving loans! The balance sheet position after money creation (assuming maximum money creation)[2]3 would be as follows:

Notice that for the original RM1,000 deposit, an additional RM9,000 deposit is created by means of loans[3].After money creation, the original RM1,000 deposit is now equivalent to 10 per cent of the current total deposits of RM10,000, i.e. the required reserve ratio. This increase in money through multiple deposit creation is a one-time increase in the ‘money base’. The formula for multiple deposit creation may be written as follows:

Interest Rates and the Growth in Money Supply

In addition to the above, the interest rates given and charged by banks also increase money supply in the long run[4].5 In the conventional economic thinking, interest rate is said to be the price of money capital, following the normal demand-supply theory. However, we should notice that interest rates themselves, ceteris paribus, would increase the money supply. This fact is very important. Therefore, we expound on this matter further.

Continuing with the earlier example, let us assume that interest rates are as follows — 5 per cent for the deposit rate and 10 per cent for the lending rate. We shall also assume that borrowed money does not earn interest. Now, in the next period the RM1,000 deposit money would earn RM50 interest and thus becomes RM1,050. The depositor would now be able to buy things in the economy for RM1,050. On the other hand, the loan balances would become RM9,900 (RM9,000 + 0.10 x RM9,000). The extra RM900 is simply the interest income to the bank. After paying depositors the interest of RM50, the bank makes a spread of RM850, which is 85 per cent of the original deposit. It is with this spread, the bank would pay the salaries of its employees, utility bills, etc., the remainder of which would comprise the bank’s retained earnings. The current balance sheet position is as shown below:

Notice that the current reserve of 1,000 is now inadequate for a total deposit of RM10,050. This suggests that, in the long run, the central bank would be forced to continually increase fiat money and/or the banks would continuously extend loans so that the reserve requirement can be met and thereby sustain the system[5]. The implication of this is that the existence of interest rates would themselves, ceteris paribus, force a continuous increase in both state money (fiat money) and bank money (loans).

Hence with the simple existence of interest rates alone, under normal circumstances, money supply in an economy will grow by default. However, it is possible for this money supply to shrink back if a depositor withdraws cash from the banking system (and keeps it from re-entering the financial system), or when a loan is repaid, or when a borrower defaults on loan repayment (which at serious levels may cause banking crises, as was the case with non-performing loans or NPLs during the 1997 Malaysian financial crisis).

In summary, a fiat money interest based financial system continuously creates money in the economic system, and by the reverse process, the money so created can also be destroyed in the event deposits are withdrawn, loans repaid or borrowers default on loan repayments.

Now since Mr B’s account is considered as a deposit, the Bank could also create money as discussed earlier through the fractional reserve requirement system. The bank can create multiple deposits by means of loans from this accounting “deposit”. If the reserve ratio is 10 per cent, then additional RM9,000 deposits can be created through loans.

Apart from this, the bank also has an additional way to create money. Let us assume that Mr A fails to pay the Bank when he receives his statement. Then the Bank will impose two charges on Mr A: (i) interest on the $1,000 for not settling it! and (ii) a late payment fee! Note that Mr A has to pay these charges even though the bank did not pay anything to Mr B in the first place. It’s all in accounting!

While it is possible to reduce (or control) money supply in the short run, for example, by increasing the reserve requirement ratio or through open market operations (i.e. the selling of government bonds or by increasing bank discount rates), we postulate that the net long-run effect will still be an increase in money supply. This is simply due to the existence of interest rates in the economy (note that government bonds too pay interest even though the money obtained through the sale of such bonds may be simply kept in the vaults).

Therefore, in an interest-based fiat monetary system, money supply simply grows in the long run, even though in the short run it may be altered through monetary policies.

[1] Other variables include the capital adequacy ratio, which we ignore here for simplicity.

[2] Although real world multipliers may never create the maximum amount, in principle the fractional reserve system allows ‘money to be created’.

[3] Notice how banks create money out of thin air. Money is created when banks extend loans. Hence money in most part is only accounting entries in the books or computer records in the form of binary bit memory space.

[5] In most countries the domestic debt levels have continuously grown.