THE EQUATION OF exchange is usually expressed as below:

Where M is the money supply; V is the velocity or the number of times per year the average dollar is spent on goods and services; P is the aggregate or average price level; and Y is the real output of goods and services produced in the economy[1].

The money supply M consists of currency in circulation plus demand deposits in banks. In monetary aggregates this is usually referred to as M1. We take this definition for money here since payments for most transactions are done with either of these two. The velocity is the number of times the average dollar is spent on goods and services within a year. Assume that Mr A used a RM50 note to buy a book, and then the bookseller used the note to buy a pair of shoes. The same RM50 note changed hands twice, being used to pay for two items in the economy within the year. Therefore, its velocity is two. The P is the aggregate price level, which is like the average price of all things in the economy. It is not measured by the consumer price index (CPI), which tracks the price of only a basket of selected goods. The Y is the real output of goods and services produced in the year — the actual quantity of tables, cars, etc.

Therefore, the equation of exchange is actually an identity — something that is true by logic. The equation suggests, for example, that if we increase the quantity of money without a corresponding increase in goods and services, only price levels will go up, i.e. inflationary (assuming velocity is constant). An example would be during the Japanese occupation of Malaya, when the Japanese introduced an abundance of paper money sometimes called by the locals ‘banana leaf money[2]’. This sudden increase in money supply only brought about inflation. This suggests that a nation cannot be made wealthy by simply printing money and putting it into the hands of its people. The velocity of money supply is generally constant in the short run[3].

It may change, for example, if there is a change in the mode of payments as when credit cards are introduced into the system for the first time. After a change, it would remain fairly constant until some other shocks come about. As suggested by the equation of exchange, if for any reason the velocity increases abruptly, the effect would be inflationary too. An example would be during the fall of the Soviet Union, people lost confidence in the Russian rouble and thus tried to get rid of it by spending it away. This increased the velocity significantly and hence brought about hyperinflation. If we take velocity as constant, this transforms the equation of exchange into the quantity theory of money that states that the nominal income (P x Y) is solely determined by thequantity of money, i.e.

Therefore, a direct relationship between money supply and nominal GDP would be observed if velocity is constant. 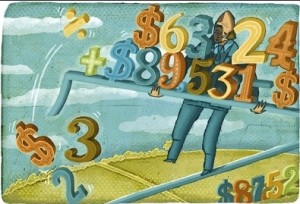 [1] MV is the monetarist counterpart of C + I + G + X in the Keynesian framework, that we normally see in Macroeconomics textbooks. MV is the total amount spent on final goods and services in one year, thus is equal to nominal GDP. Nominal GDP, in turn, equals PY which is the price level times physical output of goods and services.

[2] The money had a picture of a banana tree featured on it.

[3] This is a monetarist view. The Keynesians may argue that the V is not stable. If V is infact stable, then a direct, predictable relationship must exist between the money supply and nominal GDP. In fact, this is the case for Malaysia. The correlation coefficient between Money Supply, M1 and nominal GDP is almost unity, suggesting a stable and predictable relationship.