The esoteric grander design behind the war on terror can be viewed as a sinister objective to maintain the unchallenged status of the US dollar that is now the de facto international currency. Put simply, it is basically about the “dollar hegemony”. This is not a war on terror. It is an aggression of the highest order against the weak. It is in fact a war to control oil, and to maintain the dollar as the oil-transaction currency standard. 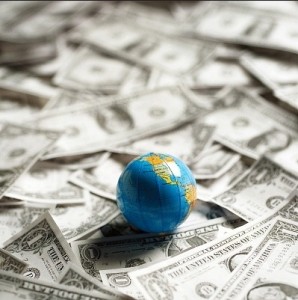 Everyone knows that the US dominates the world economically and militarily. But the exact mechanism of this domination is less well understood. This mechanism is none other than the US dollar, carried out effectively by the fiat money system.

The domain of political economy is the struggle for wealth and power. In past history, when one side goes to war and wins, it basically get to control the resources of the side that lost and exercise authority over them. The same can be said of today’s world. Control over wealth, resources and power can be acquired but this time, through the control of the fiat money system.

Fiat money is money not backed by anything with intrinsic value like gold. Fiat money is not redeemable for gold, unlike during the time of the gold standard. Therefore, the person or institution that is given the “right” to create and issue fiat money enjoys the free purchasing power that it creates, namely the benefit of using the newly created money for the first time. This benefit is called seigniorage.

The current international finance architecture is based on the US dollar as the dominant reserve currency. The dollar has been a global monetary instrument that only the US can produce. World trade is now a game where the US produces dollars and the rest of the world produces things that the dollars can buy. The dollars cost the US virtually nothing to produce. So the fact that the world uses the currency in this way means that the US imports vast quantities of goods and services for free.

The US Federal Reserve creates the dollar. Thus, it is able to assert immense power over national governments and exert control over global resources simply because it can create considerable global purchasing power practically for free. This power is being further amassed, consolidated and extended through globalisation and financial liberalisation worldwide. The position of the dollar as the international currency is considerably strengthened through the international pricing of oil in dollars.

But the dollar’s dominance in the global arena is dwindling since too much of it has been created. In fact, the world is saturated with it. It is obvious that the dollar is losing its power as the global currency, prompting the rise of the euro that challenges its status as the dominant international currency. Regarding this rivalry between the dollar and euro, Nobel Laureate Robert Mundell remarked, “Let us hope that the most important event of the 21st century will be that the dollar and the euro learn to live together.”

Fearing the imminent demise of the dollar, the US has gone “hysterical” over its gradual loss of global dominance. The euro is challenging the dollar hegemony, while China, on the other hand, is rising to become a global economic superpower. Something, therefore, has to be done. This is where the propaganda game of the war on terror comes in.

But the dynamics for the dollar’s imminent collapse is deep-rooted in economics and, therefore, is inevitable. This was when the US unleashed the war in the Middle East. Basically, the objective is to take physical control of the oil resources there as quickly as possible before the dollar is officially put to rest. This physical control over oil is necessary for the US to continue its global dominance because it could check both China and Europe as both rely greatly on the Middle East for their energy supply.

John J Maresca, vice-president of international relations, Unocal Corp, has this to say about this possible scenario:

“The Caspian region contains tremendous untapped hydrocarbon reserves… One major problem has yet to be resolved: how to get the region’s vast energy resources to the markets where they are needed. Central Asia is isolated. Their natural resources are landlocked, both geographically and politically… In addition, a chief technical obstacle, which we in the industry face in transporting oil, is the region’s existing pipeline infrastructure. Because the region’s pipelines were constructed during the Moscow-centred Soviet period, they tend to head north and west towards Russia. There are no connections to the south and east… From the outset we have made it clear that the construction of the pipeline we have proposed across Afghanistan could not begin until a recognised government is in place that has the confidence of governments, lenders and our company.”

The above excerpt from a giant energy corporation gives a clue to the actual reasons for attacks on Afghanistan and Iraq, and possibly Iran.

Not many people would link the recent Lebanon war and the attacks in Gaza with the Eilat-Ashkelon oil pipeline that connects both Israel’s port-cities from the Red Sea to the Mediterranean Sea and the recent inauguration of the Baku-Tbilisi-Ceyhan pipeline from Georgia to Turkey. It is likely that the reason for the war and attacks is to secure the proposed Ceyhan-Ashkelon pipelines that would transport four crucial utilities to Israel — Caspian oil, gas, electricity and water. It involves the strategic re-routing of Russian and Central Asian oil. Linking Ceyhan to Ashkelon would make Israel a new powerful player in the energy market. The Hezbollah are a thorn in the flesh that would disrupt this plan and needs to be weeded out before they become powerful enough to assume Lebanon’s political pulpit.

Even though the United Nations had passed a resolution to end the fighting between Israel and the Hezbollah, the conflict is sure to continue because the US and Israel are not likely to shelve their ambitions of continued world dominance. Iran and Syria will be pulled into the conflict sooner or later as they are the two nations left for the US and Israel to deal with in order to achieve their ambitions.

Despite the Republicans losing control of both Houses of Congress in the recent US mid-term elections, US foreign policy is likely to remain the same. As far as foreign policy is concerned, the Republicans and Democrats seem to play the game of “passing the baton”. Even though the Democrats used the Iraq war issue against the Republicans, they had earlier voted in favour of it. Therefore, irrespective of who dominates the US Senate, a strike on Iran still looms large for the US.

In the case of China, it is interesting to see what superpower leadership it will be able to undertake. If records of China’s past history can be used to gauge its leadership mindset, we can see that the country had opted for a diplomatic leadership. A case in point is Admiral Zheng He, a Muslim in the Ming court. Zheng He led the treasure fleets for the emperor to countries all around the Indian Ocean, including Africa. Leading a fleet of nearly 300 ships that were the most advanced of their time, with about 28,000 men, the expeditions were meant for establishing trade and goodwill with all nations and people.

Zheng He was sailing, nearly one century before Columbus, in a ship that was five times longer but many times larger in terms of space volume than Columbus’ Santa Maria. Imagine how Zheng He’s fleet of 300 such ships looked like when they weighed anchor in Melakan waters on his visit to the kingdom in 1403. For a people who were used to only sampans, the scene must have been spectacular. Yet the Chinese did not use their power to conquer or colonise other people, unlike the Portuguese, Dutch, Spaniards and British. Had China wanted, it could have easily invaded Melaka. Instead, it sent Princess Hang Li Po as a gesture of goodwill as a bride for the then Sultan of Melaka.

With such a history behind it, there is proof that China can become a world leader and yet bring other nations along with it on a journey of economic progress and prosperity but undertaken in the spirit of mutual understanding and goodwill. The success of the recent Sino-African summit and China’s pledge of considerable aid to African nations are things that reflect China’s state of mind. Hopefully, nations will come to look to China as a “fatherly nation” rather than as a potential neo-colonial power.