Two developments that are causing grave concern to nations and peoples alike in recent weeks are the US dollar and the rising price of oil. The dollar has been steadily dwindling against the euro, while on Thursday, May 21 2008, oil hit US$135 per barrel. Unfortunately, both developments are intertwined such that they become the spiral effect for the current global food crisis. This is simply because oil is priced in dollars and, of course, the price of anything measured in dollars would go up as the currency falls in value. As oil is an input for almost all production processes and transportation, general inflation is but expected. This inflation, in turn, creeps significantly into the price of food globally. How did this happen? 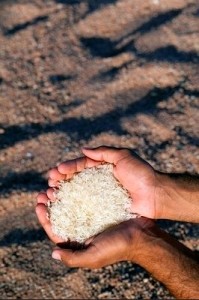 The current recession in the US has made equity and bond markets not attractive for investment, thereby causing money to leave these financial markets and flow into the commodity markets. This is what causing the price of grains – rice, wheat, corn – and indeed the price of all commodities across board to soar, thereby causing serious food crisis in many countries.

A complete plotting for the monthly averages is shown in Table 2 below. It is obvious from the plot that the rice and oil prices have been rising as the dollar depreciated.

The correlation coefficients between the three variables are as below (Jan 2001 to Dec 2007, excluding the recent months that have seen the price of rice to skyrocket)

Consistent with our findings, a United Nations report predicted that the world’s poorest countries could pay 40 percent more for food this year as they did last year (CNN, 22 May 2008). The estimated food import for these countries is $169 billion, which is four times the amount in 2000. The U.N’s Food and Agriculture Organization (FAO) identifies 82 countries as facing food crisis. Food riots have, accordingly, spread in a number of countries, notably Haiti, Senegal and Egypt. In Haiti, people have been reported to eat a mixture of mud, salt and vegetable oil to kill hunger pangs!

It is indeed strange that in a time of great technological and scientific advancements, where four decades ago mankind even set foot on moon, hundreds of millions of people are facing deprivation of food, the most basic of necessities of life. Despite the green revolution and increased harvests, never in history mankind has faced such serious food crisis on a global scale.

In our opinion, this is a failure of humanity as a whole. President Hugo Chavez of Venezuela correctly put

“It is a massacre of the world’s poor. The problem is not the production of food. It is the economic, social and political model of the world. The capitalist model is in crisis.”

Malnutrition and starvation with stunted future physical growth and intellectual abilities can be the expected results of these. From behavioral perspectives, one cannot expect very hungry people to act rationally. Extreme hunger can transform people into fighters and killers. Social unrest and chaos can, therefore, be logical outcomes.

Some analysts have provided additional reasons, such as biofuel, particularly the production of ethanol from corn, lower grain yields due to climate change and the increased demand from rising middle-income groups in China and India, as being partly responsible for the rising food prices. Notwithstanding, the blame is still largely due to the falling dollar. China and Japan have been converting their huge yet depreciating dollar reserves into things that are stores of value, notably rice. As such, the current global food crisis is indeed a monetary phenomenon and not because of the shortage of food. It is simply because millions of people can’t afford the absurd prices.

Surely, the events are but domino effects of an unsustainable floating fiat monetary system that is melting down. Catapulted by the US’s subprime loan crisis where millions of homes were foreclosed with worldwide banking crises, the US dollar woes are threatening the globe with a catastrophe. All these because the world accepted an international reserve currency that is fiat in nature, i.e. a currency that has no backing to real things, like gold, as was the case under the gold standard and Bretton Woods.

Accordingly, the global fuel and food inflation is a price the world pays for accepting an international unit of account that has no intrinsic value of its own, i.e. the absence of a numeraire. Ironically, the US is being subsidized by the whole world through an inflation tax.

Despite the impending crisis, one good news is that the problem is solvable. Actions can be taken at the international, national, and local levels to mitigate the more-than-just-inflation problem.

The most powerful solution is one that is at the international level. This is the removal of the pricing of oil in dollars. A depreciating currency means that prices of things increase relative to that currency. As the dollar price of oil rise, it also increases the price of oil in other currencies, thereby exporting inflation to other nations. However, the removal of the pricing of oil in dollars needs strong political will which most countries are somewhat reluctant to give. The late Saddam Hussein saw the consequences for wanting to price the Iraqi oil in euros. But now Iran has boldly done exactly that, and one dreads to think of the forthcoming events that were to loom for Iran should it embark on what other oil producing countries would only dream to do, but would never turn dreams into realities.

Countries that peg their currencies to the dollar also face this inflation. This is why even oil exporting Gulf countries are facing double digit inflation. These countries need to de-peg their respective currencies in order to untie the inflationary link.

Gold-based bilateral and multilateral trade agreements among countries is another powerful way to mitigate the problem. Here it is important to make sure that both the pricing and settlement are done using gold. Volatility and inflation cannot be mitigated by pricing in fiat currencies but settling in gold. In this regard, even simple barter arrangements in international trade would do a lot more good than the present reserve system employed.

At the national level, a number of things can be done. Countries can emulate India, for example, that has forbidden the trading of grains in the futures market. After all, it is the speculation in the commodities market that is significantly propping up prices. But for long-term solutions, countries can introduce real-money payment systems, parallel and complimentary to the existing fiat national currencies. Real money systems use real commodities as units of account. This includes using gold, silver and other commodities as monetary units. Electronic gold-payment systems like e-gold, goldmoney etc. are examples of such systems already in operation.

When real commodities are used as units of account, inflation would virtually disappear. Only temporal inflation due to reasons like supply shocks may thereafter occur.

At their respective levels, individuals and businesses can convert excess cash holdings into gold and the like. Gold has proven a reliable hedge against inflation over centuries. Businesses and individuals can also transact their dealings using gold. Business chambers can implement gold-payment systems among members and periodically nett-off accounts before settling. In this way a lot of trade can take place with little money. Commercial barter exchanges also have similar characteristics. This is like the multilateral payments arrangements among countries but at the business-to-business level.

Just lately, the small town of Lewes in Sussex, England, issued its own currency to address the problem. Many such examples exist including the town of Totnes and the Southern Berkshire region in Massachusetts, US. There are also others that operate worldwide under the name “local exchange trading schemes” or LETS.

In conclusion, the global inflation problem can be solved but nations must be proactive and willing to provide the political will for solutions such as above if they are serious enough to put the welfare of the people as a priority.

The solution to the dollar, and now the global food crisis lies, therefore, in what Sir Isaac Newton once remarked, that in applied mathematics one needs to define one’s units.