In recent years, we have witnessed many long-established corporations worldwide showing signs of financial distress, including those in the developed nations. MG Rover, the last British car manufacturer, is the latest case in point. It collapsed because of its debts after having been in the automotive industry for nearly a century.

At the same time, the sliding US dollar is causing jitters because that has global repercussions.

However, the symptoms of financial distress are not new. The last few decades have seen a number of currency crises, even though this one is different. The US dollar, being the leading international currency, comprises a significant portion of reserves of central banks worldwide. After the collapse of Bretton Woods in 1971, the US dollar, like other world currencies, became a fiat currency. Since then, the world has operated under a “pure” fiat money system.

A fiat currency is money that has no intrinsic value of its own. It is not redeemable for gold, or anything of value for that matter. It takes predominantly two forms — currency notes and coins (state-issued money) and accounting money such as cheques and electronic money (created by commercial banks through loans).

The normal definitions of monetary aggregates, including those by Bank Negara Malaysia, define the former as M0, and the total of all monetary aggregates as M3. It is interesting to note that in this monetary system, most money takes the second form. Malaysian data for 2004, for example, show that only 4.6% of money stock was notes and coins (debt-free money) while the remainder was credit money, or accounting money. Generally, over time, the proportion of credit money in the economy will grow while that of debt-free money will fall (see chart). A similar trend is seen in most countries, including the UK where current credit money comprises about 98% of money stock. The process that enables commercial banks to create credit money is the fractional reserve banking system. 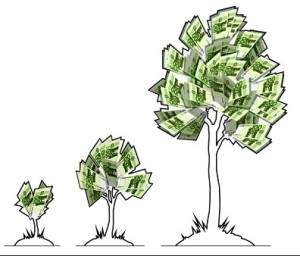 So, what’s the problem with this? And what has this got to do with MG Rover or the financial distress of other long-established corporations, or the dollar crisis itself?

The thing is, as money is continuously introduced in the form of debt, the total indebtedness of a nation would keep rising, in the form of individual, company or government debt. There are two important things to note. Firstly, there is a fundamental mismatch in the risk profiles of credit money and the business world in general. When money is created out of nothing and given out as loans to business organisations, banks generally demand the repayment of it on a periodic basis. The repayment schedule is contractual and, therefore, represents a “riskless” cash flow from the financial perspective.

Nonetheless, business ventures are not riskless in nature. Therefore, as the proportion of credit money in a nation increases, this mismatch and its implications become increasingly obvious. In other words, the rising proportion of credit money has implications for the capital structure of firms. It is a well-known fact that firms can only bear debt up to a certain level, depending on the level of their business risks.

Secondly, an important feature of credit money is that the total debt is non-repayable in aggregate. In other words, while some borrowers may be able to repay their loans, there are others who may “default”. Loans are not repayable in aggregate because the money needed to settle the aggregate interest in the economy does not exist in the system. In other words, the total interest in the economy must and can only be paid in the form of real goods and services. This real payment of interest takes place when banks confiscate collateral or other assets, or spend the loan repayments made by borrowers. The government could pump in more non-debt state money to avoid such defaults, but statistics in most nations reveal a falling proportion of this form of money.

It is contended that this mismatch in the risk profiles and the “sure-default” characteristics of the interest-based fiat monetary system are manifested in the numerous corporate and government loan defaults that we witness globally now. For example, the number of AAA-rated companies in the US was 58 in 1979 (a few years after Bretton Woods), 27 in 1990 and only eight in 2002

Why do we see such statistics in the aggregate economy when nowadays, we have financial managers who are assisted by sophisticated computers with access to real-time database and other professional financial advisers? How could the huge “low-risk” energy firm Enron fail? Why is MG Rover in financial distress? While normally, we would look for firm-specific reasons, debt is undoubtedly the main culprit. Reasons like irregularities in accounting and the like are simply the manifestation of the problem entwined with agency problems.

Indeed, it is seigniorage that makes counterfeiting illegal, since the counterfeiter unfairly benefits from the first use of the counterfeit money. Currently, the seigniorage of credit money has made all nations highly indebted, including the US which, surprisingly, is the largest debtor in the world. If all nations, including the US are indebted, and for every debtor there must be a creditor, who then are the creditors?

In the global scenario, seigniorage of the international fiat currencies is, in large part, behind the current instability of the global monetary order. The Nobel Laureate Robert Mundell regards the Federal Reserve as the greatest engine of inflation ever created, pumping out billions of dollars, which other nations collect as reserves (Robert Mundell, The International Monetary System in the 21st Century: Could Gold Make a Comeback, page 5, http://www. robertmundell.net/gold). Of course, the seigniorage of these billions of dollars is a benefit to the Federal Reserve, which has enabled the US to fund its huge trade deficits for years.

Indeed, such value creation out of nothing cannot go on indefinitely. As too much money is created, the economic subjects, at some point, would begin to question the credibility of the whole thing. This is what the US is facing currently. According to Richard Duncan, the former consultant to the World Bank and the International Monetary Fund (IMF), a dollar crisis is now inevitable. If the experts’ predictions are correct, the situation is indeed scary. The World Bank recently issued a warning that the falling dollar would bring about serious repercussions to Third World countries, contradicting earlier IMF calls to these countries to “beef up” their dollar reserves. It is unfair that poor nations are made to bear the burden of the falling dollar.

Some economists think that in such an event, the dollar is likely to be replaced by the euro, yen or/and renminbi as international currencies. But it would be catastrophic if a dollar crisis occurs as people globally would lose confidence in the entire fiat monetary system. What guarantee is there, for example, that the euro will not show similar dynamics?

Nations must therefore strategically put in place alternative money systems so that the effect would not be so disastrous. Former Prime Minister Tun Mahathir Mohamad has ceaselessly called for the use of other currencies, including gold, as reserves, and for international trade settlements. Even domestic payment systems based on real money should be encouraged.

Developing nations can take a cue from Curitiba, Brazil, which its mayor transformed from a downtrodden slum into a city. Amazingly, it became as beautiful as cities like Hong Kong or Singapore within one generation, all using a real money system. Imagine a First-World city in a Third-World country. The thing that makes the difference is the monetary system. Thus, the type of monetary system employed defines relationships in the economy and the kind of social structure that emanates from it.

Any long-term reform to the global monetary structure must address the problem of the seigniorage of fiat money. If a number is written in the “books” and out of nothing made to have value and purchasing power, it will surely translate into problems and crises later. Money must have its own intrinsic value (like gold) or linked to assets that have such value.

Corporate financial managers should therefore know the fiat money system in depth, including the seigniorage of fiat currency, the fractional reserve banking, the ownership effects of these and the implications for corporate finance. The macro financial system has a lot to do with the financial performance of individuals, firms, governments, economic cycles and the like. The seigniorage of fiat money is ignored in macroeconomic analysis. Syariah scholars too need to study and analyse its implications for Islamic banking and finance.