In the recent UN climate change conference in Bangkok, scientists from all over the world concluded that the earth is in peril, caused primarily by the actions of mankind. The Intergovernmental Panel on Climate Change (IPCC) warned that the atmospheric and environmental pollution and the consequences thereof on climate change can have devastating effects if proactive mitigation actions were not taken immediately. 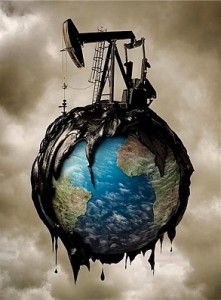 Many academics have linked in detail the monetary system to the environmental destruction particularly deforestation, global warming and climate change. At the bottom of the problem is the nature of interest in the fiat monetary system. While fiat money is money not backed by gold or anything of value, interest charges in this system have some unique and important characteristics relevant for the argument. Three of them are pertinent here.

Firstly, debt cannot be repaid in total, i.e. principal plus interest, in the aggregate at any given time. This is because the interest portion that need to be paid along with the principal does not exist in the form of money in the economy. The implication of this is that, in the aggregate, interest payments can only paid in real terms, i.e. goods, services or other assets including those placed as collateral for the loans. This is the reason why, in the aggregate economy, debt default is by the design of the system.

Secondly, debt service (i.e. the repayment of principal plus interest) is considered as a riskless cashflow since the borrower is obligated to pay back, as per the contract, according to a predetermined repayment schedule. But nonetheless, the business world is a risky world. This brings about a mismatch, in terms of their risk profiles, between the nature debt-money and the real economy which it is supposed to facilitate. And it is important to note that indeed, in most if not all countries, debt-money i.e. money created in the form of loan constitutes a much higher proportion in their monetary aggregates.

The third characteristic of interest that is pertinent to our discussion is that it is in counter to the physical law of entrophy, a law of thermodynamics that refers to the tendency of physical systems to move towards greater disorder. According to this law, order can be maintained or increased through the consumption of energy and matter from outside the system. The rotting of food, the decaying of dead bodies, the depreciation of assets etc. are examples of enthrophy when new energy and matter are not consumed.

Applying the concept to economics, in a barter economy for example, when a farmer does not consume part of the paddy he had harvested, it would represent as his savings in the real form. If he does not invest it by replanting, then over time, the seeds can rot due to the entrophy process, and become not suitable for consumption or further investment. But however, the entrophy process can be reversed so as to achieve greater order by replanting the seeds, for example. Therefore, by taking energy from the sun and matter from earth, a greater order is achieved, in the form of plant, fruit, seed etc. Accordingly, in the real physical economy, savings that is not ‘invested’ can deteriorate. While investing on the other hand, of course, involves risks, like what if, for example, the replanted seeds die due to draught etc. Therefore savings in the real economy that is not invested by taking on risks would fall in value due to entrophy.

Interest charges violate this principle. When money is saved, it actually should represent something in the real economy that is being saved. While those real things would experience entrophy, money saved in the present system increases in value due to interest! This fact is further worsened in a fiat monetary system where money and interests are all ‘virtual’. This is why some development economists tell us that a negative interest rate is necessary to achieve sustainable economic development. Negative interest rate implies that if one saves and does not wish to take risks of investing the savings then the value of the savings should fall over time. This then matches the entrophy law. But in today’s monetary system one is able to save without taking on any risks and still earn interest income! Therefore, money and interest in a fiat money system indeed go against the natural order where the real economy works.

Now the working of those three characteristics of interest in the international economy is of concern. When countries, particularly the developing nations, borrow internationally they should remember the three implications for the aggregate global economy:

1.    The loans are not repayable in total at any given time.
2.    Some countries are bound to default
3.    The interest portion and defaults can be only repaid in real term.

Hence developing nations that borrow oney from international financial institutions like IMF and World Bank must remember that collectively their loans are not repayable and therefore some nations got to default and likely to plunder further their natural resources in the attempt to repay the loans.

The developing nations being generally not industrialized nations, would service their debt using agricultural products or natural resources available. Accordingly, countries with forests would tend to deplete them in their attempt to pay off their external debt. Such deforestation, in turn, have been linked to global warming and climate change. As mentioned earlier many academics have provided detailed evidence for external debt as being a cause of deforestation. A simple evidence is provided below. The table below provides the data for the top twenty deforesters in the world and the relationship between deforestation and external debt for the period 1990 to 2005. The correlation strength between deforestation and the increase in external debt is indeed a high value of 0.875.

Since most money in the present fiat monetary system is created ‘virtual’ in the form of debt that carries with it compounding interest charges, this demands the economy to keep ‘working’ to pay back that virtual loan plus the non-existent interest money. The system basically causes the plundering natural resources, i.e. transforms real wealth that is in the form of trees, health etc. into virtual wealth, like electronic records as money.

The IPCC report says that greenhouse gas emissions had risen by 70% since 1970 (about the time when total fiat global monetary system started), and will rise by between 25% and 90% over the next 25 years under present scenario. Carbon dioxide (CO2) emissions greatly contributes towards this, brought about by mainly the use of fossil fuels in industries and automobiles. Deforestation, on the other hand, shrinks the existing natural mechanism that absorbs CO2 from the atmosphere and release oxygen (O2) that living things need for survival. 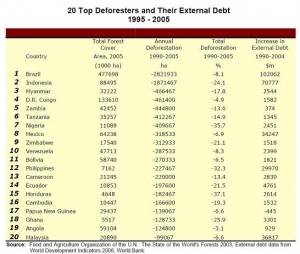 The correlation strength between Annual Deforestation and the Increase in External Debt is 0.875

Interest charges in the monetary system contributes to both sides, i.e. to ‘overwork’ the industries since money is scarce and thereby encourage competition and contributing to deforestation since interest charges must ultimately be paid in real terms. Many of the highly indebted countries are not even able to service the interest portion of their debt. Hence it is of surprise that they tend to plunder their forests indiscriminately in their attempt to pay-off their loans.

Even though billionaire Sir Richard Branson and former US vice president Al Gore have launched a multi-million dollar competition to come up with an innovation that can remove carbon from the atmosphere, I cannot think of a better way than preserving and replanting forest trees to do the job.

In my opinion, firstly the world must urgently revamp its global monetary system in order to bring it in-tune with the natural order. This, of course, can be very tricky in current global circumstances. Additionally, governments should stress on afforestation, reforestation, reduced deforestation and encourage the use of non-fossil renewable energy sources.

On the sideline, recently the Prime Minister Abdullah Ahmad Badawi called upon for new homes to be constructed with built-in rain water catchers. This indeed is an excellent idea considering the fact that fresh-water is expected become a very scarce resource in the near future. In the same tone, perhaps the government could encourage the public to go for alternative non-fossil fuels like biodiesel, solar, wind, hydroelectric and even geothermals if there’s any possibility. The government for a start could, for example, give tax benefits for the production, distribution and customer installation of solar panels, for example. Homes fitted with solar panels would considerably reduce the use of energy from fossil fuels.

Scientists tell us that fossil fuels significantly come from the ‘pea-brained’ dinosaurs that once ruled the earth for a period of approximately 200 million years, and which have been extinct for about 65 million years before the emergence of man on earth. But mankind, likely the most intelligent being ever, has been on earth relatively for only a very short period. The Stone-Age, when he was dwelling in caves, was only about 20,000 years ago. But at the current state of global affairs, it’s obvious that this intelligent man could not even, for a short period, take care of his only planet of dwelling, losing to the dinosaurs’ multiple folds. What shame.