While poverty may be due to reasons most of which are already known in economics and sociology, it can also be looked at from another viewpoint, namely from the monetary viewpoint. Looked at from this angle, poverty may be significantly due to the structure of the global monetary system itself, particularly the fractional reserve banking system that is practiced worldwide. 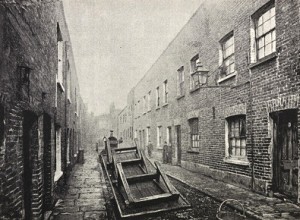 The word ‘fractional reserve’ refers to the fraction from total deposits that banks must keep as reserve. This reserve ratio is determined and used by the central bank as one tool of monetary policy for controlling the money supply in the economy. The Bank Negara Malaysia, for example, imposes this reserve requirement on commercial banks as the Statutory Reserve Requirement (SRR). This reserve requirement determines the amount of money that commercial banks can create (The total = deposit ÷ SRR). The smaller the reserve requirement is, the more the money that can be created. For example, if the SRR is 4 percent, a RM1 million cash deposit can support a total deposit of RM25 million. The additional RM24 million can be introduced into the economy by the banking system in the form of loans. Opposed to currencies and coins in circulation, the money created by commercial banks takes the form of numerical or accounting money, circulated as cheques, credit card payments, electronic transfers, and the like. In other words, it is money created by means of mere accounting entries. The benefit of new money creation, known as seigniorage (the value given to money over and above its cost of production), accrues to the bank that lends it out at interest.

The fractional reserve banking and its accruing seigniorage have implications for asset ownership through their distributional effects, including the creation of poverty. Since fiat money is easy to create, most economies create too much of it relative to their ability to produce goods and services. This results in the growth in money supply that exceeds the growth of the real GDP, thereby causing inflation to reel (The table below, extracted from the writer’s book entitled The Theft of Nations, provides the statistics for some selected countries. The reader can easily guess which countries are likely to experience hyperinflation and hence socio-economic problems). 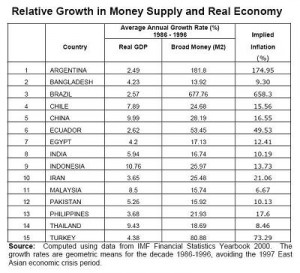 The socio-economic implications of this inflation arise from the fact that the newly created money does not accrue in the hands of every individual ‘evenly’. If the money or income of the people were to grow as the inflation rate does, then their real income would be intact and inflation would not be a problem. But true to the contrary, the new money created in the form of loans would instead go to corporations and individuals who are already relatively ‘well-off’ as only they are capable of depicting better credit-worthiness. A host of socio-economic problems would naturally result as a significant portion of the population does not experience income growth that would match the growth in money supply and the henceforth inflation rate.

This group would find its real income being gradually eroded by the annual growth in money supply, and hence the possibility of running into poverty. This increase in money supply can be aptly described as ‘inflation tax’, a tax on every individual in the economy that accrues to the one who creates and owns the money.

To illustrate the point, when a commercial bank extends a loan of RM300,000 for the purchase of an existing house, all individuals in the economy are actually financing the transfer of ownership of the house to the bank by means of inflation. This is because when the bank creates the additional RM300,000 through fractional reserve banking, there would now be more money in the economy relative to the real things and inflation would naturally come about. Initially, the bank neither had the RM300,000 nor the house. However, a mere accounting entry immediately places the ownership of the house with the bank. The implication of this is that the transfer of ownership is actually paid for by the entire economy through inflation. As a result, the seigniorage of the principal amount and interest accrues to the bank, all by means of mere numerical accounting only. The way money can be created with such ease would also mean the possibility of the excessiveness of its creation, and thus the ballooning of inflation. This inevitably forces governments to enforce price controls on basic necessities, particularly food items. The excessive money supply also creeps into other sectors and causes asset price bubbles, particularly in the stock and property markets. Furthermore, any productive activity whose profitability cannot match the interest rate would naturally ‘die-off’. The agricultural sector, being a much government-controlled sector, is particularly vulnerable to such a system, such that in many cases it warrants governments to subsidize the sector. Economically advanced countries, for that matter, still substantially subsidize their agriculture despite their highly modernized techniques in agricultural produce.

The property sector, being a sector that significantly absorbs money supply, would depict on average better growth and profitability. Price of homes and other properties on average are likely to grow faster than the general average inflation rate. This of course would pose housing problems for those pushed into the lower rung of the economy by the growing money supply in terms of real income. Home affordability would therefore gradually decrease, prompting calls for smaller homes, more flats, lowcost housing, longer mortgage durations, and other such price-cutting measures. Mortgage durations of 10 to 15 years were common during the 1970’s but banks today are even willing to extend them to as long as 35 years. There are even suggestions for two-generation mortgages.

Poverty can be caused by real economy, that is to say, by the lack of supply of real things. It can also be caused by the monetary system. In a modern capitalist economy, the creation of abundance of money that accrues very unevenly in the hands of individuals can aggravate poverty. Milton Friedman, a well-known monetary economist, says that inflation is predominantly a monetary phenomenon. If this is the case, the worsening of the global poverty problem can be significantly pointed at the institutions that are responsible for the creation of fiat money.

To tackle this problem, one of the imminent steps to be taken is the revamp of the local and global monetary systems that will tailor to a gradual move away from the fiat monetary system towards a system that is based on real money, such as gold.

Poverty eradication must, therefore, be approached not only from the real economy perspective, but also from the monetary perspective. The World Bank’s motto, namely ‘Working for a World Free of Poverty,’ has largely remained a utopian chase and rhetoric precisely because it is operating on the principles of fiat money and a global monetary system that lacks the mechanism for equitable distribution of wealth, that are ironically two of the defining causes of poverty.