Solution for Countries to Boost Back Shrinking Populations

In the last few decades global fertility rates have, in general, been on the downward trend, affecting some countries more than others. Fertility rate refers to the average number of children that would be born to a woman if she were to live to the end of her childbearing years. This rate is of particular interest to those who study demographic trends in countries because it tells a lot about the future of the people in concern. For example if the rate is too low, then the population could face a rise in aging population which could find itself difficult to sustain economically. Also over long-periods of time sustained low rates could significantly reduce the size of the population, its culture and so forth. A high fertility rate could also be seen as potentially imposing problems to parents and governments since the young population needs to be nurtured, educated, provided with jobs etc. Hence some countries have imposed one-child or two-child policies at one time or another, for example China and Singapore. Now Singapore is among the countries that have very low fertility rate. Low fertility does not necessarily imply infertility, i.e. the inability to produce offsprings, because it could be due to even fertile people choosing to have few or no children at all. Singapore’s founding premier Mr. Lee Kuan Yew in his book One Man’s View of the World remarked,

“…Is there a country in this world that prospers on a declining population? If I had to identify one issue that threatens Singapore’s survival the most, it would be this one. I cannot solve the problem and I have given up. I have given up the job to another generation of leaders. Hopefully, they or their successors will eventually find a way out.” (p222). 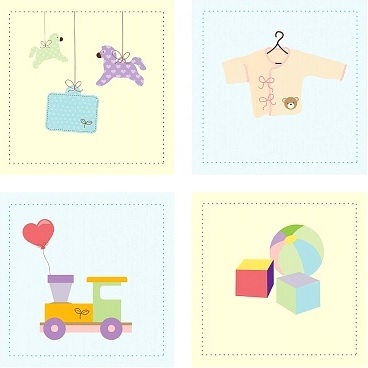 Also that if he were to become the premier again, that he would give mothers a baby bonus equivalent to two years of average Singapore salary, just to prove a point that the population would still continue to shrink simply because there has been a mindset change among the people, particularly the young generation.

Indeed, most developed nations are also faced with similar problem and other less developed nations are slowly following suit. It is said that for a society to sustain itself, the fertility rate should be at least 2.11, also known as the replacement rate. We need two children to simply replace the parents and the extra 0.11 to cater for things like infertility, late marriage, postponing childbearing, early deaths, choosing to remain single and so forth. Fertility rates below 2.11 would cause the population size to fall. Table 1 below provides the 2012 fertility rate for some selected countries. Only India and New Zealand seem to have at least the replacement rate.

Rates below 1.3 are, apparently, impossible to be reversed back to the replacement level because it would take many decades to do so, and there is no way a population could be economically sustained for that long of period, before it corrects itself. Many advanced and developed nations – including the US, Europe, Britain, Scandinavian countries, Japan, Australia and New Zealand – indeed have fertility rates below 2.11, indicating as though there is a negative relationship between economic advancement and fertility rate. Continued at this rate, these countries could face serious problems in the future from from labour shortages and aging population. Some less-developed countries, including many Muslim countries, have fertility rates much higher than 2.11 prompting migrations from these countries to the developed nations that face population shrinks and thereby labour shortages. Indeed, some quarters have exploited this fact to put fear into the hearts of people, scaring them with things like “Islamic immigration”, “Arabization of Europe” which they term as Eurabia and so forth; that prompted author Daug Saunders to write the book “The Myth of the Muslim Tide” (Vintage 2012) in which he quells such fears.

But what are the factors causing the fertility rates in most countries to dwindle? Indeed even in developing countries where the rates have generally been higher than 2.11, are also falling. Studies have shown many factors as being responsible for the falling fertility rates, including lifestyle changes and government policies. Women with higher education and paid jobs tend to postpone childbearing and have fewer children. Career ambitions could be partly the reason too. Policies like tax credits, cash benefits and childcare supports all help reduce childcare costs. Nonetheless the problem of falling fertility rates seems to persist in most countries. The acceptance of lesbian, gay and transsexual lifestyles in society surely would contribute further to this problem.

This article argues that the globally-prevalent interest-based fiat money system of today is a significant determinant of fertility rate. The reason is as follows. Money in the present monetary system is fiat in nature, i.e. not backed by anything real like gold etc. and comes in the form of paper notes, coins, accounting numbers and electronic records. The accounting numbers including the electronic ones are generally created as money by the commercial banks in the form of loans that carry interest charges. Compound interest, mathematically, is an exponential function that causes money in the economy to grow exponentially. However, since the real sector cannot match this exponential growth of money, it brings about inflation and disparity in income and wealth distribution; which, therefore, can be seen as inbuilt features of the present monetary system.

This ‘inbuilt’ inflation, of course, increases both the cost of child-rearing and also the cost of retirement. Accordingly, living costs, education and healthcare costs are rising fast. A recent article in the Star daily (19 April 2015) reported that Malaysians in general must save 20% more of their income over and above their EPF savings in order to retire comfortably or otherwise risk of not having enough for retirement. Hence, having children can be seen as an opportunity cost of retiring comfortably. These factors, therefore, prompt people to have fewer children or even choose not to have any children at all. In many circumstances this also prompts the women folk to go to work to supplement family income. Hench, double income and multiple jobs are now necessities for many families. Their ‘over-working’ culture leaves less time for family togetherness and hence them having less children.

Generally, financial inclusion of all people is an important factor for broad-based economic development. Financial inclusion refers to the state where individuals and firms have easy access to basic financial services. Nonetheless, interest-based financial inclusion could prove ‘deadly’ for economies because most people are likely to become net borrowers and faced with the tradeoff choice between children and retirement. Of this, Mr. Lee Kuan Yew said that Singapore will ‘fold up’ if its citizens do not procreate. In 2012 Singapore and Malaysia had fertility rates of 1.3 and 2.0 respectively (Table 1). Table 2 below provides the Fertility Rate and Financial Inclusion Index for 35 countries. These countries comprised the sample in an IMF working paper study mentioned below. 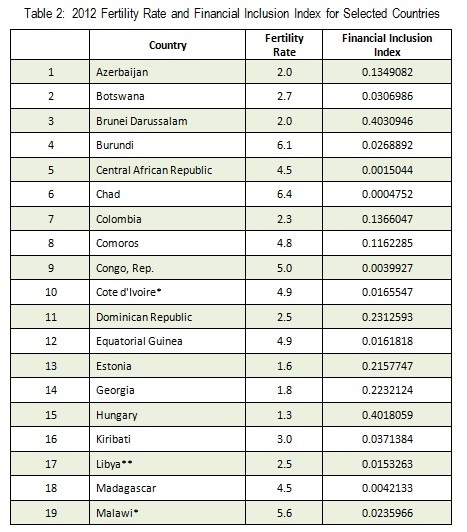 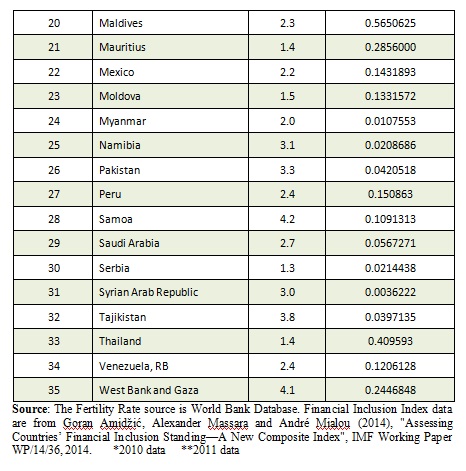 The correlation coefficient between the financial inclusion index and the fertility rate is a negative 0.53, which is statistically significant.

Accordingly, I contend here that interest rates do negatively affect fertility rates, which if go unchecked can have disastrous effects on nations and the culture of their peoples in the long run. Accordingly, it may be beneficial for nations to consider interest-free financing modes. It is my strong view that nations that aspire to solve their shrinking population problem must first abolish their interest-based monetary and financial system and replace it with systems that are based on risk-sharing principles. I hope Europe, the US, Japan, Singapore and others that are faced with shrinking population problem would replace their interest-based monetary system with interest-free systems to ‘save’ their populations and unique cultures. In this regard, Islamic finance comes to mind and indeed is something all nations can consider. This article, however, provides just a preliminary suggestion to the possible link between interest-rates and fertility rates. Further research into this would surely shed more light.