The domain of political economy is the struggle for wealth and power.  These two normally go hand in hand; if one has power one can command wealth and wealth can also lead to power.  In time immemorial, mankind has fought countless wars and battles with the intent of gaining wealth and power, i.e. authority over people and control over resources.  If one wins a battle, these two domains are what one basically obtains.

In the present world context, nonetheless, one need not go for wars and battles to get hold of these two domains of political economy.  There is another way though, that is the control or authority over the credit creation of an economy.  This is because in the present global system, money is mostly created out of thin air, in the form of loans.  This new money takes the form of mere accounting entries in the books of commercial banks, and is loaned out to borrowers at interest.  Since this involves the creation of new purchasing power, the loan officer of the bank is indeed being entrusted with a very responsible function within the economy, i.e. to allocate resources of the nation in the most productive, just and efficient manner.  Misrepresentation or abuse of this power would surely end in misallocation of resources, with potentially disastrous consequences in the long run.  This can be very costly considering the fact that allocation of resources in a fiat monetary system is attained by creating inflation in the economy.  Consequences of misallocation can, therefore, be very damaging to the economy, society and the political structure. 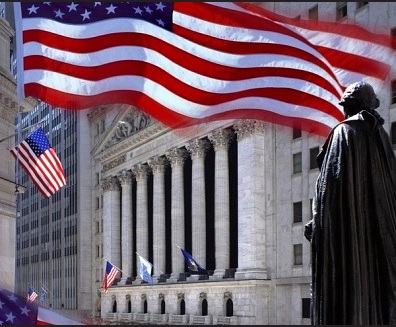 Keeping in mind that wealth and power are interlinked, this article shows how it is possible to manipulate the fiat money system in order to attain the two domains of political economy, i.e. wealth and power.

In most of human history, money had always been linked to something real, and therefore had intrinsic value of its own.  Gold and silver were the preferred precious metals, against which the values of all other things were measured and exchanged.  Money, as we know it, were simply standard units of these measures of value.  For example, in the near past, 1/32th ounce of gold was made equivalent to one US dollar under the Bretton Woods system; a gold dinar in the Islamic monetary history was equivalent to 4.25 grams of gold and the silver dirham equivalent to about 3grams of silver, and so forth.

Mankind’s linking of money to valuable commodities like gold and silver is a consequence of a learned behavior, i.e. one that ensures fairness and justice in economic exchanges of goods and services, among all people and nations.  In this way, even though money was used in economic transactions, the transactions were essentially barter, i.e. exchange of value for equivalent value, as shown in Diagram 1.

After the demise of the Bretton Woods system in 1971, the entire global monetary system is now on a fiat money regime, i.e. money that is no longer linked to gold or silver.  Fiat money is, therefore, not redeemable any longer for gold or silver from the central bank or the authority that issued it.  Since then, in the current system, paper money (and now electronic money) that practically has no intrinsic value is now being exchanged for real goods and services in the economy (Diagram 2).  People and businesses accept fiat money because, for one, it is made legal tender by the authorities, and two, they know they can exchange it back for other things in the economy.  The problem with fiat money lies, however, with the first use of the money, i.e. the attached seigniorage.  Seigniorage is the benefit obtained from the first use of the fiat money, which is also the benefit derived by those who counterfeit money.  Seigniorage of fiat money is the name of the grand political game that is being played on a global scale.  It has tremendous implications for the economy, society, environment and political power. 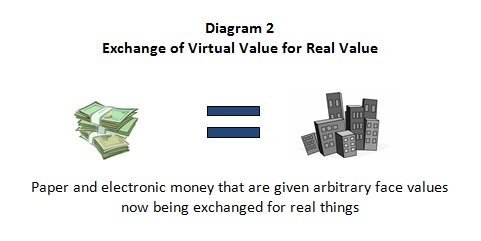 I will restrict myself to the discussion of only one important implication of this seigniorage of fiat money, i.e. its implications for wealth and power.  We mentioned earlier that loan officers of banks are entrusted with the ultimate power to create money out of thin air and loan it out to those who, in their opinion, would bring about the most desirable allocation of resources.  In this, rests a considerable yet subtle power to control the wealth of a nation.

It is a known fact that every nation has different competing interest-groups, divided along different political affiliations, religious beliefs, ideologies, races or even social classes.  These different interest-groups can indeed use the fiat money system as a tool to attain an upper hand in their struggle for the control over a nation’s wealth and political power.

Amschel Bauer Mayer Rothschild (1838) is reported to have said: “Let me issue and control a nation’s money and I care not who makes its laws”.  This statement underscores how ultimate political power rests within the power to create money.

Accordingly, in the current fiat money system, the ultimate game is which interest-group gets to borrow most money within the limited liability framework; and keep circulating the money within the group, as much as possible.  In this way, therefore, if defaults happen, then the borrower is protected through the limited liability law.  But the money, however, by then would have been pushed into the interest-group and kept circling within it.  Indeed, it is even in the interest of the group to systematically declare bankruptcies.  Hence, over time, significant national wealth would ultimately accumulate within this group, i.e. the group that wins the game of who can borrow the most fiat money from the financial system under limited liability (See Diagram 3). 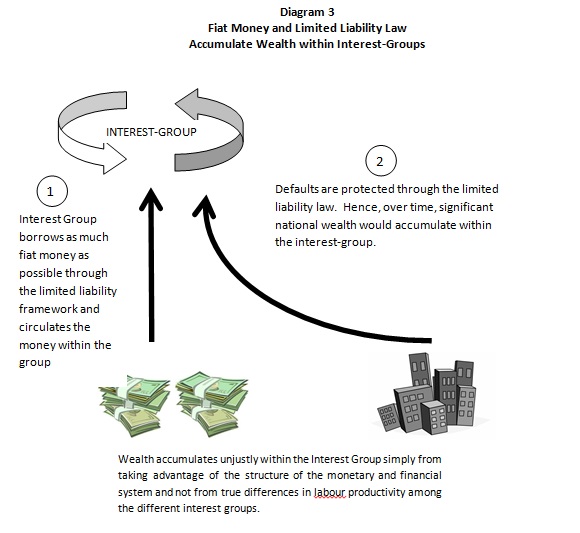 An informed interest-group may strategize itself in order to win this game; like even strategically placing its people in decision-making positions within bank loan offices.  Groups that lack strategy or ignorant of this game at all, are bound to lose their wealth and power to the winning group.

Do such games actually take place in the countries of the world?  Is it happening in Malaysia?  Judging from humanity’s struggle for wealth and power throughout history, in my opinion, it would be naïve to believe otherwise.  I tell people, show me the distribution of loan advancements and I will show you the wealth distribution in the nation.  And with wealth comes power.  Hence the interest-group that wins this game would, over time, also accumulate political power.  This can push some groups towards economic and political deprivation, creating inequality including poverty.  This is how, in my opinion, in some countries the wealth of the indigenous people, especially in colonized countries, had been plundered away.  Central banks and authorities who have the data can research on this wealth distribution effect.

Nobel Laureate, Joseph E. Stiglitz, in his latest book The Price of Inequality, argued how such inequality endangers the future of societies.  The seigniorage game discussed earlier is none other than a powerful means for rent-seeking that brings about continuous gross inequality within the subjects and interest-groups within the economy.

Hence it is important, in my opinion, that fiat money be fairly distributed among the different interest-groups in an economy, if equitable wealth distribution and social harmony are desired.  In today’s situation, difference in labour productivity alone cannot explain the wide gap that exists in income and wealth distribution among subjects and also different interest-groups in most countries. Wealth and power, the two domains of political economy, are indeed being transferred unjustly through the inherent ‘flaws’ of the current fiat money system, which enables systematic rent-seeking to take place.

Accordingly, prolonged effects from past decades of the fiat money system have caused serious inequalities to exist in most countries of the world, both developed and developing.  Therefore, a planned correction of wealth distribution is necessary in all these countries.  Few brave leaders of past have done it before.  Napoleon Bonaparte is reported to have pointed out, “Terrorism, war and bankruptcy are caused by the privatization of money, issued as a debt and compounded by interest “.  Accordingly, he cancelled all debt and interest in France, but then had to face the Battle of Waterloo (1815).  Much earlier in history, Joseph (Prophet Yusuf, peace be upon him), as adviser to the king of Egypt, also cancelled all debt in the nation and redistributed wealth among his people.  Jesus Christ (peace be upon him) too is reported to have claimed that he had come to cancel all debt and free all slaves, i.e. to proclaim the Jubilee Year of the Jewish tradition.  But cancelling debt and redistributing wealth is a humungous political task that is easier said than done.

When one analyzes the whole thing, one cannot but conclude that the cause of inequalities that exists in much of today’s societies is rooted in the fact that fiat money, which is a virtual wealth is equated to real wealth.  The world needs to put an end to this; and institute a measure of value and money that is based on something that is real.  Gold and silver can prevent such ‘looting’ of the economy.  Hence linking money back to gold and silver is inevitable to establish a just, stable and sustainable economic system, with equitable distribution of income, wealth and power among the people.  And yes, as Stiglitz puts it, inequality is not inevitable.