On the 28th February, 2011 the Chief Minister of Perak, Dato’ Seri Dr. Zambry Abdul Kadir, launched the state of Perak’s own gold dinars and silver dirhams.  The state of Kelantan had earlier launched its gold dinars and silver dirhams on the 20th of September 2006 in Kota Bahru where I was invited to address an excited crowd.  Kelantan issued a newer design for its coins in August 2010.  The issuance of gold dinars by the states attracted comments from many quarters, with the Deputy Minister of Finance, Datuk Dr. Awang Adek Hussin highlighting the fact that the gold dinar is not a legal tender in Malaysia.  Also, many people queried the difference between the coins issued by Perak vis-a-vis the coins issued by Kelantan. 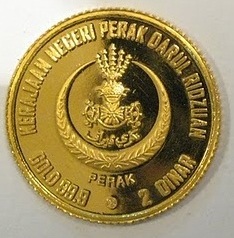 To start with, the gold dinar and the silver dirhams are generally understood as the Islamic monetary units, i.e. Shari’ah money.  These being the dominant money and measures of value during the entire history of Muslim empires that stretched from Morocco in the west to India in the east, covering a time-span from the 7th century to the first quarter of the 20th century when the Ottoman caliphate was defeated.  Nonetheless, in reality the gold dinar and silver dirham were not of Islamic origin, rather owe their origin to the Roman gold coin called denarius and the Persian silver coin called drachma.  The prophet of Islam, Muhammad peace be upon him, accepted the two coins as the monetary standard for Islamic trade, business and financial transactions.  They also form the monetary basis for Shar’iah laws of business transactions muamalat, capital punishments hudud, marriage dowry mahr and the compulsory religious alms zakat.  Hence the gold dinar and silver dirhams lost their monetary role officially with the collapse of the Ottoman caliphate in 1924.  Nevertheless, gold continued to play a role in the international monetary system until the Bretton Woods was ended in 1971.  In the Bretton Woods system, only the dollar was redeemable for gold, i.e. 1/35 oz of gold for each dollar.  The rest of the world currencies were not required to be gold-backed as the dollar was, but only needed to keep their exchange rates with the dollar stable. 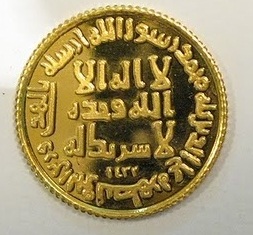 With the current global monetary and economic crisis continuing, people have begun to look towards precious metals like gold and silver as safe havens for their savings.  Firstly the price of precious metals are expected to rise further, making gold and silver as excellent investment choice while at the same time these metals can also protect savings from the hyperinflation that is being predicted in the current global economic scenario.  Inflation, of course, eats into the purchasing power of savings and future returns.  The current rush for gold in the country is evident from the frequent advertisements and articles on gold that appear in the news media.  Now let me highlight the difference between the dinar of Perak and the dinar of Kelantan.

The gold dinar weights 4.25 grams but historically there have been differences in the purity of the coins depending on where, when and who issued the coins.  The first Islamic gold dinars were issued by the fifth Umayyad caliph Abd al-Malek ibn Marwan in the year 75 Hijra which coincides with the Gregorian year 697 CE.  We call it ‘Islamic’ simply because the caliph replaced the Roman pagan inscriptions on the coin with those based on Qur’anic verses.  The fact that the first Islamic gold dinars were issued only after about half a century from the prophet’s demise indicates that what matters most is not the inscriptions on the coin but rather the gold content of the coins; and Abd al-Malek’s coins were 97 percent of purity, constrained by the mining and refining technology of the time.  Historically Muslims had always striven to improve the quality of the coins.  Some coins from the Fatimid Dynasty period in the 11th century Egypt, were of pure gold.  Abd al-Malek minted the coins in large quantities, imposed strict quality control and severe punishment for any kind of tempering of the coins.  These caused the coins to circulate wider and even replaced the Roman bezant as the dominant coin in Christian Europe.  This is clear evidence that when there is freedom of monetary choice, good money would drive out bad money.

Kelantan initially launched the gold dinars and silver dirhams claiming them to be alternative money to the national currency, ringgit.  It also claimed that about a thousand businesses were ready to accept them as money.  This, of course, attracted the attention of the authorities, particularly the Ministry of Finance and the Bank Negara.  As mentioned earlier, the Deputy Finance Minister, Datuk Dr. Awang Adek Hussin responded by saying that the gold dinar is not a legal tender.  The Deputy Finance Minister challenged the state government of Kelantan to prove that the gold dinar monetary system can work and succeed.

Indeed, given the present laws of the country, the gold dinar as money is unlikely to succeed. The legal tender law would prevent it from circulating as money.  With the legal tender law in place, i.e. when monetary freedom is curtailed, bad money would drive out good money from circulation, contrary to when there is no such law as was the case when Islamic gold dinars became the dominant coins even in Europe. Therefore, in this case the ringgit which is a fiat paper currency would drive out the gold dinars from circulation.  In economics, this is known as Gresham’s Law. This law seems to explain the apparent silence of Bank Negara regarding the gold dinar because they know with legal tender law, gold will not circulate as money.  Kelantan’s actions would be mere futile unless the people intentionally defy the law.  Hence, the success of the gold dinar not only lies in the general acceptance of it as money but also simultaneously lies with the freedom of people to reject inferior money, like fiat currencies.  Without this freedom bad money would drive out good money from circulation.

Realizing the above fact, the state government of Perak did not issue its gold dinars and silver dirhams as alternative money but rather as excellent items for investing in precious metals or for hedging against inflation. The state, therefore, does not intend to break any Federal law.  On the contrary, it is engaging with the authorities to form a coalition of the willing regarding the gold dinar.  With the global financial-economic-political crisis continuing unabated, hyperinflation is predicted to set in and the price of precious metals like gold and silver are expected to continue to rise to high levels.  The graph below shows the gold price for the period 2000 to present. 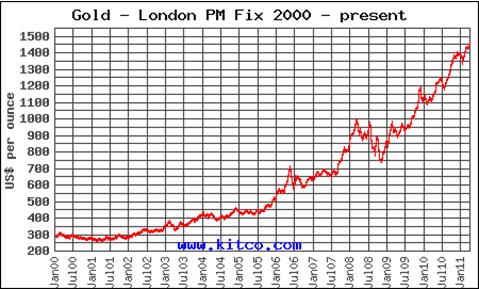 Notice the exponential growth of the gold price.  The table below provides the annual return for gold investment based on average annual gold price in dollars per ounce. 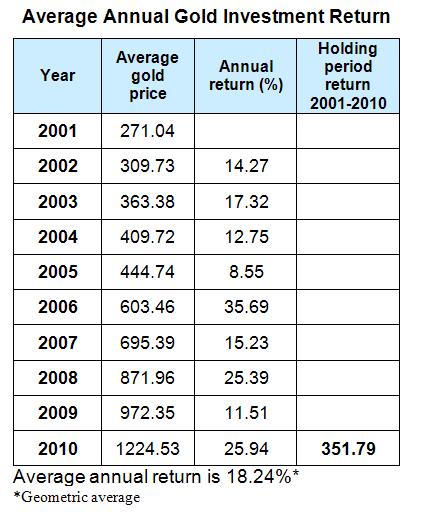 Notice that the average annual return for the nine-year period is 18.24 percent while the holding period return for 2001 to 2010 is a whopping 351.79 percent.  The increasing vulnerability of the dollar, the quantitative easings of the US, the political chaos in the Middle East, the earthquake-tsunami followed by the ongoing nuclear crisis in Japan, global climatic changes etc. are all putting severe stress on the global monetary and economic condition.  Hence my prediction is that gold will continue to make strides at least till the end of 2012.

The state of Perak also stressed other uses for its dinars and dirhams, i.e the coins make good choice as gifts for many occasions; like mahar or marriage dowry, wedding anniversaries, new births, birthdays and so on.  They also make good corporate gifts – golden handshakes, medals, awards for recognizing achievements etc.

As for the design, the Kelantan gold dinar features the crest of the state of Kelantan on the obverse side of the coin with a modern calligraphy of the Muslim ‘shahadah’ and a full Qur’anic verse, i.e. verse Al-Mu’minun, 23:52,  on the reverse side.  The Perak gold dinar also depicts the ‘shahadah’ but not complete and full Qur’anic verses.  I am of the opinion that the original Islamic gold dinars never depicted full Qur’anic verses because of the possibilities that people might take them into impure places like the toilet or lose them to the ground.  Another grave danger of depicting full Qur’anic verses is, if the already minted and distributed coins were found to have errors in the verses.  This would be most unfortunate for the minting government because it would be extremely difficult to recall back such coins.  People would even tend to keep them because coins with errors tend to fetch higher prices in the market!

The Perak gold dinar design, on the other hand, depicts historical heritage and modernity.  On the obverse of the coin is the crest of the state of Perak, which depicts modernity, while the reverse of the coin replicates the design of the first original gold dinar, signifying historical heritage.  Accordingly, the Menteri Besar of Perak, Dato’ Seri Dr. Zambry Abdul Kadir was proud when he acclaimed, “It [the Perak gold dinar] is one of its kind and probably the first in the world, because it revives back the first Islamic gold dinar ever minted, that is the coin issued by the caliph Abd al-Malik ibn Marwan in the year 75 Hijrah, that coincides with the year 697C.E.   I am proud to revive the original Islamic gold dinar after 1,357 lunar years.”  The Perak gold dinars are minted by an experienced Perak-based local company whereas the Kelantan gold dinars are minted in Dubai.

The Perak gold dinar venture would also contribute towards some wakaf initiative as its social responsibility.  Wakf is a religious public endowment, usually given in the form of lasting assets like land, building etc., for the purposes of religious activities, education, healthcare etc.

To conclude, given the current global political and economic situation, it is my ardent hope that the government would give permission for or by its own put in place parallel gold-based monetary systems as soon as possible.  Such real-money systems are very much needed now considering the fact that the global economic system is currently showing serious vulnerability and threatens the world with serious recession, unemployment, inflation and possibly wars, the social implications of which are unimaginable.  The greatest advantage at present times of the gold dinar initiative is that it can protect the savings of the people from being eroded by inflation or even from possible monetary meltdowns while promising good returns.  The gold dinars and silver dirhams issued by both the states are, therefore, timely.