CURRENCY SPECULATORS AND arbitrageurs made huge profits during the 1997 East Asian Crisis. They took advantage of the flaws inherent in the global fiat monetary system. These speculators, that include international financial institutions and fund managers, are very knowledgeable about financial markets, economic cycles, etc. They use this knowledge to “attack” currencies, etc. to reap huge profits. The huge economic bubble that hovered over the East Asian countries, created by the fiat money credit bubble[1], lured these speculators to attack the currencies of these countries by shorting them. Their action popped the bubble that brought about the 1997 East Asian crisis. Collective action of speculators would amount to an attack on the currency. While the central bank may counter such attacks to keep exchange rates within reasonable levels, a continuous attack can be difficult for the central bank to match. While speculators can take on huge leveraged positions, the central bank would need large amounts of foreign reserves to counter this. Inability to match the speculators would cause the exchange rate to plunge as happened to the Asian currencies. 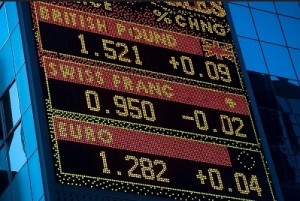 The ringgit depreciated from an exchange rate of about RM2.47 to the dollar before the crisis to a rate of RM4.80 at some point in time during the crisis.

While one may argue that it is ethically not right for speculators to attack a currency, it is the current global monetary system that allowed them to do so. When an exchange rate moves due to speculative attacks or otherwise, it breaks the equilibrium among currencies. This makes it possible for further profiteering called arbitrage profits. Arbitrage is like finding money on the ground. An example of currency speculation and arbitrage is given below.

Currency Speculation and Arbitrage: An Example

Consider the ringgit when it was attacked in August 1997. The shorting of the currency by speculators pushed the ringgit downward. Let us assume an initial exchange rate between three currencies, say, the ringgit, dollar and Singapore dollar as below:

Such exchange rates are in equilibrium since no one can make profit by just trading between the three currencies. If one were to start with a dollar, exchange it into Singapore dollar, then change the Singapore dollar into ringgit and then back into US dollar, one would end up with a dollar again[2].

Now assume that the shorting of the ringgit by the speculators pushes the exchange rate to RM3.80 per US dollar as shown below:

By attacking the currency as such, the traders make two types of profits:

Speculative Profit: Speculative profit comes from the speculating that a currency would appreciate or depreciate (either due to economic factors or the speculative attacks themselves or even both). If the speculation is correct, then the traders would make profits, however, if their speculation turns out to be wrong, they would then make losses. In our example, profit is made as follows. First, the trader sells short RM2.4 million ringgit at the initial exchange rate of 2.40 per dollar. This equals US$1 million and would be credited to his account. Assume now that the attack caused the ringgit to depreciate to RM3.80 per dollar. Now at this new exchange rate the RM2.4 million is worth only US$0.63 million[3].

Therefore, the trader closes his position by buying back the RM2.4 million at this new rate and makes a handsome profit of US$0.37 million (i.e. US$370,000!). Even though the trader makes a hefty speculative profit of about US$370,000, the profit does not end there. There is another profit to be made — the arbitrage profit.

Step 1: Borrow US$1 million[4] and exchange it into RM3.8 million (at the new prevailing exchange rate of RM3.80 per US dollar).

Hence the total speculative and arbitrage profits equal 370,000 + 583,333 = US$953,333. Note that for a transaction of US$1 million each in the speculative and arbitrage activities, the profit is almost a whopping US$1 million too! Currency traders, however, do not just trade in millions but rather in billions! Hence imagine the amount of profits they would be making!!

Speculative and arbitrage profits using national currencies are made possible by the mere existence of numerous fiat currencies that are volatile in nature. The global fiat monetary system provides a fertile ground for speculation, manipulation and arbitrage in the foreign exchange market[7].

[1] But erroneously termed the ‘Asian Miracle’.

[2] In this example we have ignored transaction costs. In practice, the buying and the  selling rates for currencies would differ; the difference being the profit to the bank or money changer. Ignoring transaction costs, however, does not affect the illustration of this example.

[4] Since arbitrage is done at a point in time, one may borrow this US$1 million probably for just a few minutes within which the entire transaction could be completed, particularly if transactions are done on-line using computers.

[5] Note that, in the example, the arbitrage transactions must be done clockwise starting from any of the currencies. This example starts from US$. If we had started using RM1million, the profit would have been RM583,333 instead. Transactions done anticlockwise would result in losses. Therefore, upfront one needs to determine the direction for making arbitrage profits — clockwise or anti-clockwise.

[6] If profit is made using four or more currencies, then all transactions except three are either redundant or they reduce the profit made. Mathematically, if all the cross exchange rates were placed in a matrix, equilibrium would imply the determinant of the matrix to equal zero. If the determinant does not equal zero, then it implies arbitrage opportunity exists somewhere between the currencies.