President Obama is inheriting the US perhaps in its worst position in its history – an economy that is in recession, with a possibility of even a depression; one that is threatening to bring the whole world down along with it. We are looking at a monetary meltdown, foreclosures of homes, financially distressed businesses, loss of jobs, wide disparity in wealth distribution, default on loans like mortgages, credit cards, student-loans, and so forth. 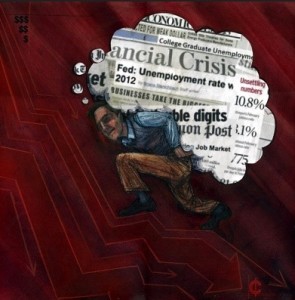 In his inauguration speech President Obama mentioned the economy as his key priority issue. Possibly that is also the world’s top wish with respect to his presidency. A humongous task, therefore, lies ahead of him as the world is also about enter into one of its worst recessions in history.

Perhaps it’s not an exaggeration to say that in these difficult times, people globally have high hopes on him. The world currently is in a dire position after a stressful and traumatic eight years the world through under President Bush. And Obama came along with the motto “Change. We Need”. And he got a overwhelming support. People are placing high aspirations that he would be able to bring about the changes that are being very much wished for; changes for a better world in many sense. Everyone is looking forward for a stable, just, healthy, prosperous and peaceful world.

The Paulson’s $700 billion bailout and other earlier bailouts would only widen further the disparity in wealth distribution because individuals and businesses have already been highly indebted and would find difficulty to bear more debt. It’s this over-indebtedness that is responsible for why even interest rates close to zero do not seem to stimulate the real economy. While some have suggested that the bailout would be financed using the US tax payers’ money, the truth is that the whole world would pay for it. Yes the whole world would pay for it through global inflation simply because the dollar is still the dominant international currency. This would entail a massive transfer of global wealth to the US financial institutions that benefit from the bailout. Hence the bailouts would not only worsen the coming global recession but also global disparity in wealth distribution. More people, firms, institutions and governments globally are likely to default on loans. Accordingly, additional and accelerating destruction of global money can be expected that would bring about global recession and unemployment – practically a global chaos.

Some pundits have suggested that this is a global problem and that only a global central bank can solve it. That such suggestions for a global central bank would be put forward has long been expected. This is indeed the financial and political elites’ solution to the crisis. Yes a global central bank is capable of providing the needed stability to the current financial mess. But nonetheless it would enthrone the elites with supreme power, as that unseen before, by consolidating significant global political and financial authority. The role of national central banks and local politicians would be reduced to mere enforcers of the elite’s policies. The elites could then intervene in all aspects of a nation including its policies on education, culture etc. From a political-economy perspective that would be akin to the much touted New World Order.

With the world professing diverse national, religious and other ideologies, one should therefore recognize that even though a global central bank may be capable of bringing about stability, it is unlikely to achieve the justness aspect. And without justness, there will be no peace.

On the contrary, a system based on real money is capable of producing both stability and justness. A real-money system is one that is backed to a numeraire. The best numeraires are commodities that have characteristics of money, like gold, silver, oil, grains etc. In other words even the new Bretton Woods II system proposed by some will bring a lot more good and justice to the world. Such a system would render practically a fixed-exchange-rate regime that would eradicate volatility, manipulation, speculation and arbitraging from the foreign exchange market. Such is the monetary system that is badly needed by the world currently.

A real-money system, like that linked to gold, would also allow people and nations to express their own beliefs, culture etc. Therefore, the world can coexist peacefully with multiple ideologies and give people the choice of belonging to any of their preferred belief system. Hence a monetary system based on gold or other commodities like oil, grain etc. would not only be stable but also just.

George Bernard Shaw (1856-1950) once remarked:
You have a choice between the natural stability of gold and the honesty and intelligence of the members of government. And with all due respect for those gentlemen, I advise you, as long as the capitalist system lasts, vote for gold.

Introducing real-money systems is a long-term solution for governments to plan through and implement. In this aspect, there is an opportunity for the Gulf countries to take a lead. The region is currently attempting to form a Gulf monetary union by 2010, similar to the euro-region. Its unified currency, the Khaleej dinar, can easily be made into a preferred international currency if it were made redeemable for a certain unit of oil. For example, say 40 Khaleej dinars equivalent to one barrel of oil. Such an arrangement would put in place the missing numeraire and bring forth the needed stability and justice into the global monetary system.

As for reviving the US and global economy, the most important prerequisite that I see is that the US, and also major economies of the world, need debt write-offs, debt write-down or some kind of bankruptcy reorganization. The total debt, public and private of the US for example, has exceeded USD 50 trillion. Almost everyone is significantly indebted.

The credit crunch, which is simply the destruction of money in the books of bankers, indeed accumulates real wealth with the bankers, through confiscation of collaterals when the real economy defaults on loans. Hence, as much as one bails-out banks, one needs to bailout the real economy too. It’s obvious the financial meltdown has now spilled over to the real economy. The bailout request from the US auto industry, like Chrysler, Ford and GM, is an evidence.

With an economy that is highly indebted, the US government, individuals and firms, need debt pardons or debt write-downs before the US economy can be jump-started.

An interesting research by historian and economist, Michael Hudson, showed that debt pardons were periodically carried out by rulers during the biblical ages to ‘revive’ the economy. Jesus Christ (peace be upon him) is reported to have remarked upon entering Nazareth, that he had come to proclaim the Year of the Lord. Apparently, the Year of the Lord is when slaves are freed and debts are pardoned.

The world urgently needs a similar ‘Year of the Lord’. In President Obama’s hand is an envious God-given opportunity to repeat that 2000-year old historical event, in the path of Jesus Christ, and deliver his subjects from the bondage of debt-slavery. A debt-ridden America would surely welcome such action and President Obama would be remembered in history as truly a great president.

President Bush attempted to ‘solve’ the US’ economy and hegemony problems through military means against Iraq – boosting the economy through the military industry but ultimately hoping to control the oil resources of Iraq and the Middle East in the process. But, all that ended in utter failure. Our hope now is that President Obama would not be lured into repeating that failure again.

However, noting the advisors appointed by President Obama some quarters are skeptical that the President would not take a similar path. President Obama had indeed said that the US should get out of Iraq, but fight in Afghanistan. And just two days after his election victory, he was criticizing Iran on its nuclear program. Hopefully Obama would not be tempted to go for another war, particularly with Iran.

Otherwise, just like the Soviet Union that succumbed to a prolonged war with Afghanistan, by disintegrating into smaller independent states, there is likelihood that the United States too might not remain united if it finds itself in another war. A war with Iran could breakup the United States into similar form of independent states; and thereafter Obama would go in history as ‘not so great a president after all’, or worst still as the president who disintegrated United States, contradicting his own statement, given in the speech delivered in Chicago after his election victory when he said, “We are, and always will be, the United States of America.” That would surely damage Obama’s legacy as the first African-American President.

Hence instead of being confrontational, President Obama should engage peacefully with all nations, particularly China, India, the Middle East and probably Russia too. The key to his economic and political success lies in cooperating with these countries and others but most of all delivering his subjects from the ever-mounting debt, which is not of their fault but rather due to the very nature of the modern debt-based monetary system.

President Obama said that he plans to create 2.5 million jobs in the United States by rebuilding the nation’s roads and bridges, modernizing schools and creating more sources of alternative energy. These constitute fiscal stimuli and are indeed right things to do. Not only the US, but also the rest of the world should embark upon such mega infrastructure projects worldwide like transcontinental roads, railroads, bridges, dams, hydroelectric and nuclear power stations etc – in mitigating and reversing the coming biting global recession.