Islamic banking and finance in Malaysia cater to the needs of those who wish to avoid conducting their financial dealings operating on the riba, or interest. Accordingly, Islamic financial institutions in the country have introduced a number of Shariah-compliant modes for home ownership, the dominant of which are the al-bay’ bithaman ajil (BBA) and the musharakah mutanaqisah (MM) partnership contracts. The BBA, or sale with deferred payment, is popular in countries like Malaysia, Indonesia, and Brunei. The MM, or diminishing partnership, is widely practised in the Middle East, the United States, Canada, United Kingdom, and Australia. Shariah scholars from the Middle East generally disapprove of the BBA partnership contract. 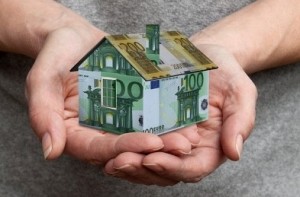 In Malaysia, where the BBA is operative, voices of discontent were beginning to emerge from its customers. The BBA was criticized as an “unjust” instrument of transaction compared to the conventional mortgage system. For example, in purchasing a home, the selling was said not to reflect the market value due to substantial mark-up for the payment deferment. Also, for early redemption of the payment, the balance is always larger, at any point in time, until fully settled. This can be illustrated as follows.

For example, a customer purchases a house for RM200,000. He puts a down-payment of 10 percent, or the equivalent of RM20,000. The remaining RM180,000 is financed through the BBA. Suppose that the Annual Profit Rate (APR) charged by the bank is 10 percent per annum and the duration of the financing is 20 years. Under the BBA, the bank would first buy the house. It then resells it to the customer at a profit, with deferred payment over the 20-year period.

The monthly payment for the above financing is RM1,737.04 (computed using the standard formula for present value of annuities ), payable for 240 months. The total payment would stand at RM416,889.35. A difference of RM236, 889.35 results between this figure and the original financing figure of RM180,000. This amount represents the total profit for the bank. In the conventional mortgage, it represents the total interest paid for the loan over the 20-year period. The profit of RM236,889.35 is capitalized upfront in the BBA mode, whereas in the conventional mode, the interest does not become due unless also time becomes due.

One important difference between the BBA and the conventional mortgage is the balance of finance remaining before the contract expires. The BBA balance after 10 years (i.e. after 120 payments), for example, is the total of the remaining 120 payments, which equals to RM208,444.80. Under the conventional mode, the balance is the present value of the said payments, which is RM131,443.76 (the bank does not charge interest for the remaining 10 years). In the case of the BBA, the bank may give some rebate for early redemption. Nevertheless, the amount is determined at the discretion of the bank, since the Shari’ah prohibits the rebate to be stated as part of the contract. Note that even after ten years of payments, the balance under the BBA mode can even exceed the original financing of RM180,000.

The loophole in the BBA is unavoidable, considering the financial milieu in which it operates. Two different financial systems that coexist are bound to converge due to arbitrage activities between them. Islamic banking is gradually converging to its conventional counterpart. It is converging from its original “profit-sharing” principle into a more fixed-rate financing, like the murabaha (cost plus) and ijarah (lease).

This shift creates substantial arbitrage opportunities between the fixed-rate Islamic market and the more floating-rate conventional market, particularly through interest rate swaps. It is therefore not surprising that market traders, as well as Shariah scholars, are currently talking about profit-rate swaps, reciprocal loans, etc., which are innovative instruments for arbitraging the difference between the two banking systems. The fixed-rate BBA also posed liquidity-risk management problems for Islamic banking where the profit rate remains constant throughout the tenor of financing but its sources of funds were generally short-term in nature. This problem was apparent during the 1997-98 financial crisis where the Islamic banks were unable to react to the then sharply rising interest rates.

Today, Islamic finance is converging to the floating-rate market. The Bank Negara Malaysia has allowed a floating-rate BBA where customers are required to pay monthly payments on the higher side but, nonetheless, receive rebates that depend on the prevailing interest rate. Having to pay high monthly payments prior to receiving rebates can cause cashflow problems and prove burdensome. The convergence of the two banking systems also brings about other problems. Dissatisfied customers, for example, accuse Islamic banking as being unIslamic and not different from the conventional banking.

There are two portions in this contract. First, the customer enters into a partnership (musharakah) under the concept of ‘shirkah al-milk’ (joint ownership) with the bank. The customer pays, for example, 10 percent as the initial share to co-own the house whilst the bank provides the balance. The customer then gradually redeems the financier’s 90 percent share at an agreed portion periodically until the house is fully owned by the customer. Second, the bank leases its share in the house ownership to the customer under the concept of ijarah (lease). Each rental payment is jointly shared between the customer and the bank according to the respective share holding, at that point in time, which keeps changing as the customer redeems the financier’s share. The customer’s share ratio would, therefore, increase after each rental payment until eventually fully owned. The MM is, therefore, suitable for financing assets such as homes and machineries where the assets can be leased out. The MM can be illustrated as follows.

Consider the previous example of home financing where the customer pays 10 percent of the price, i.e. RM20,000, and the financier finances the remaining RM180,000. Under the BBA and the conventional mode of transaction, the customer pays RM1,737.04 per month to the financier. Suppose the rent is RM1000 per month (Annual Rent/Price ratio of 6 percent is assumed), the ‘amortization’ schedule for the MM is shown in Table 1 below with monthly payments of only RM1289.58. This saves him RM447.46 per month. The additional RM289.58 over the monthly rent of RM1000 is needed so that the customer can redeem the financier’s share in 20 years.

Thus, under the MM, although the customer pays only RM1289.58 per month, he still acquires the home in 20 years. If the customer chooses to pay RM1,737.04, then he will own the home in 12 years 3 months, and not having to wait for 20 years. This way, he saves 8 years of monthly payments. 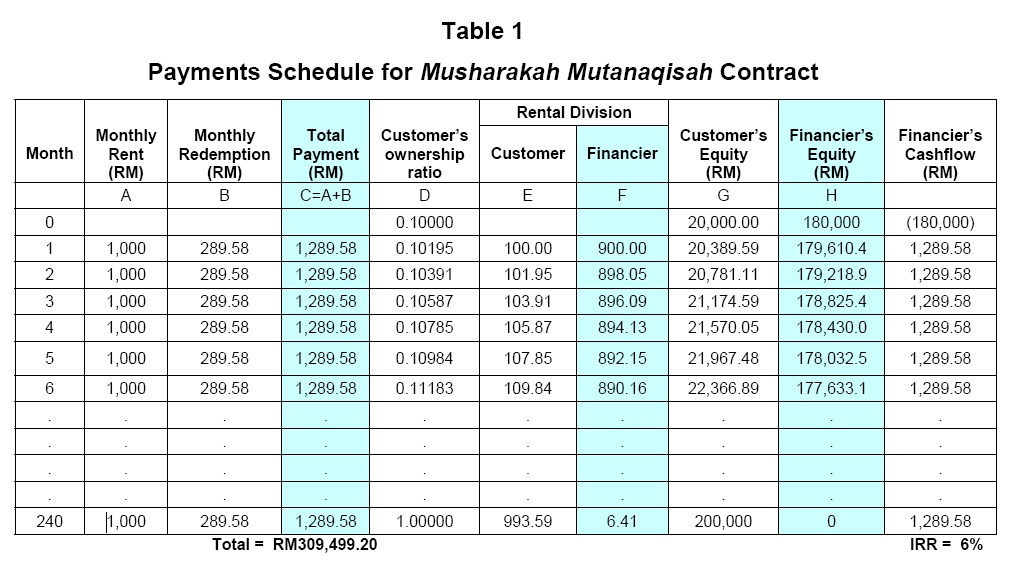 From the foregoing arguments, it is obvious that the MM may not be attractive to bankers compared to the BBA contract. Hence, the MM is suited to be practised, for example, by housing cooperatives where the funds are provided by the members for the benefit of the members themselves. While providing cheaper housing for the cooperative members, the MM also provides them with an avenue for real estate investment. Nonetheless, if the house price is also periodically revalued, as suggested by Bank Negara Malaysia’s Shariah advisor Dr. Mohd Ali Hj. Baharum, then the capital gain would further increase the return to the financier and, thereby, render the MM equally, if not more attractive, than the conventional or the BBA. Indeed, the MM concept has been adopted by a number of Islamic financial services providers worldwide. Successful models include the Islamic Housing Cooperative (Canada), Ansar Cooperative Housing (Canada), Ansar Housing Limited (U.K), Arab Banking Corporation and the Lloyds TSB (UK), LARIBA Finance House (California), Guidance Financial Group (Virginia) and the Meezan Bank “Easy Home” scheme (Pakistan). In this regard, Maybank’s proactive action to consider introducing the MM is commendable.

Nonetheless, the MM is not going to be free from operational problems. For example, tracking rental values can prove cumbersome, particularly in multiple locations. Over time, rental values usually rise and it would not be easy to convince the customer that he now has to pay higher rentals. Some quarters have therefore, suggested the use of market interest rates, such as the KLIBOR, BLR, LIBOR, and the like, as benchmarks for the rental. However, the mathematical formulas being the same, this would render the MM similar to the floating-rate conventional financing (with the difference again being only in the ownership structure). Since many real-estate studies have shown the property price to be a significant variable determining rent, we propose here some kind of real estate index be used for benchmarking, such as the House Price Index in the case of Malaysia (released by the Valuation & Property Services Department, Ministry of Finance, Malaysia. See www.jpph.gov.my). Hence, unlike the interest rate, a house price index will be directly linked to the usufruct of the asset (with the index value differing according to locality).

The implementation of the MM may also require amendments to tax regulations to allow only rental charges contributing to profit be treated as income to the bank. In other words, rental charges that contribute to the customer’s equity must not be taxable.